Book Online or Call Us!

*Promotion is subject to availability, may not be combinable with certain fares or other amenity offers, is capacity controlled and may be withdrawn at any time. Other restrictions apply.

*Promotion is subject to availability, may not be combinable with certain fares or other amenity offers, is capacity controlled and may be withdrawn at any time. Other restrictions apply.

READY TO PLAN YOUR SHORE EXCURSIONS?

Originally a fort built by the U.S. Army in 1838, during the Second Seminole War, Ft. Lauderdale has little left of its warlike past. Instead the city welcomes visitors with broad beaches and an easy pace of life, plus convenient air and water connections that make the city a perfect place to visit.

Cartagena is full of history and charm. At La Popa Monastery, you will have a panoramic view of the city and harbor. Enjoy the artisan center of Las Bovedas (The Dungeons), Plaza Bolivar, the Palace of Inquisition and the Church of San Pedro Claver, and shop for Colombian emeralds - the finest in the world.

Cartagena is full of history and charm. At La Popa Monastery, you will have a panoramic view of the city and harbor. Enjoy the artisan center of Las Bovedas (The Dungeons), Plaza Bolivar, the Palace of Inquisition and the Church of San Pedro Claver, and shop for Colombian emeralds - the finest in the world.

Linking the Atlantic to the Pacific, the Panama Canal provides one of cruising's most unforgettable experiences. Over 10 years were needed to complete the canal's 51 miles in 1914 - so avoiding the lengthy and often dangerous voyage around Cape Horn. 'The Big Ditch' lifts vessels by a fascinating feat of mechanics aided by on-shore 'mule' locomotives through three great locks, traversing man-made lakes, channels blasted through rock, and the dense jungle. Two other special highlights of the canal are Gatun Lake and the Gaillard cut. Gatun Lake is one of the world's largest man-made lakes covering 163 square miles. Gaillard Cut is an 8 mile channel built through solid rock which was the most difficult excavation in the canal construction.

The Central Pacific's largest city, Puntarenas sits on a long, narrow peninsula in the Gulf of Nicoya in Costa Rica. For years, it was the country's principal port, and though Puntarenas handles big cruise ships, a large fishing fleet still anchors in the estuary behind town. Being the country's most important fishing port, Puntarenas is the perfect place to enjoy fresh seafood. Though the water is murky, and the beach may seem a bit urban, it's a lively town on weekends, when people from San José fill its waterfront restaurants and bars. A series of open-air cafes that line the beach are the perfect place to head for dessert, or refreshments, since they specialize in ice cream and fresh fruit drinks.

Puerto Quetzal, on the Pacific coast of Guatemala, gives access to Guatemala City, the capital, beaches and some significant historical sites. Magnificent buildings of the colonial period remain at Antigua, the colonial capital, located near Guatemala City. Guatemala was the center of the old Mayan civilization, and many sites from the classic Mayan period (3rd-10th century AD) have been excavated and studied. The largest of these is Tikal in the northern lowlands, where some 3,000 structures, including tall temple pyramids as well as plazas and monuments, cover an area of about 6 sq miles. Thought to have sustained a population of 50,000 at its peak, it was abandoned for unknown reasons at the end of the 10th century.

Once sought after by pirates for its safe harbors, the Los Cabos region of the Southern Baja Peninsula is now home to bustling towns of San Jose del Cabo and Cabo San Lucas. Each offers travelers an exciting, fun-filled destination. Cabo San Lucas, with a population of 25,000, is the faster-growing of the two. In the past few years, swanky new hotels and sleek condos have been added to round out this vacation destination. Superb sportfishing put Cabo San Lucas on the map, but non-fishermen will enjoy the thriving beach community as well. Snorkeling gear, boats, waverunners, kayaks, paddleboats and windsurf boards are all available for the active vacationer.

San Diego is a city offering a little for everyone. Tons of beaches line San Diego's coastline, ranging from the surfer's beach to the family beach to the private romantic beaches hidden away from the crowds. Attractions like Sea World and the world famous San Diego Zoo are a big reason San Diego is a great family destination. And for those who are just here to get away for the weekend and have a good time, San Diego offers an unbelievable nightlife with outrageous nightclubs, live concerts, professional sports, theatrical performances and much more. 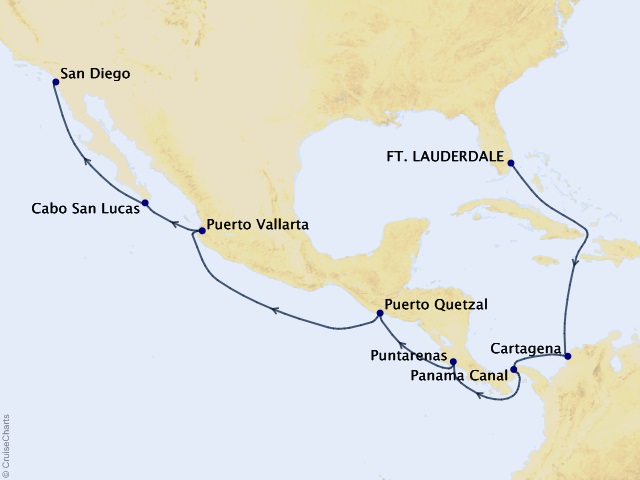 Itinerary subject to change without notice. Please confirm itinerary at time of booking.

Rates are cruise only, per person, based on double occupancy. Taxes, Fees and Port Expenses of $372.07 additional for all guests. Rates are subject to availability and may change without notice. Restrictions may apply.

Remarks:
Prices are per person, based on double occupancy. Airfare, Taxes, Fees and Port Expenses are additional for all guests. Pricing for 3rd and 4th guests are available upon request and are subject to stateroom category availability. Prices change frequently

All prices per person and in USD unless otherwise stated.
Offer ID:
1382085

Reference this number when contacting our agency so we may better serve you. Also keeping this number handy will allow you to locate this document again quickly.

Information and pricing is subject to change without notice. While we do our very best to ensure that information and pricing appearing in this website is complete and accurate, we cannot be responsible for incomplete and inaccurate representations, which may or may not be under our control. In the event of a pricing error, misrepresentation or omission, we reserve the right to adjust the pricing or make any other corrections.